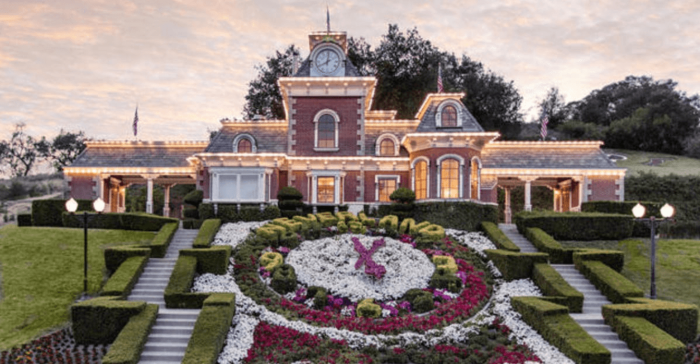 3 years after Safechuck first introduced his allegations in court he suddenly realized that he was molested all over Neverland including in places which didn’t even exist.

While Safechuck is the only accuser who claims this and you can’t find this in his 2014-2016 petition, complaints or declaration, in a scene of Leaving Neverland, shot in 2017 he described how he and Jackson “had sex” “every day” in various Neverland spots, including in the upstairs room of the iconic train station.

Putting aside that that room was actually a loft without a door or even four walls where employees and guests, including the parents, could enter any time thus any abuse there would contradict Safechuck’s story of how careful and even paranoid Jackson was, supposedly setting up a secure place with an alarm and locks because “not getting caught was fundamental”,

there’s irrefutable proof the abuse in that train station could not have happened as it was built long after Safechuck’s alleged abuse ended, at a time when Safechuck was almost 16 years old, postpubescent and in fact already bigger than Jackson.

Safechuck repeatedly stated in his court documents , including a sworn declaration, that his “abuse” ended in 1992, when he was 14 and when he fully reached puberty.

Safechuck compares it to when couples are first dating, meaning it happened at the beginning of their relationship which would be 1988-1989 not 1993-1994. He also complains that in September 1992 Brett Barnes replaced him as the next victim. (Brett Barnes consistently defended Jackson and denounced Leaving Neverland)

This photo showing the station still under construction was taken by AP photographer Louis Bernstein on December 13, 1993.

The photo shows trees without leaves. Allan Scanlan, who worked in Neverland full time between 1990 and 2007, confirmed that some trees lost their leaves during the colder winter months.

and Louis Bernstein confirmed she started to work for AP in Los Angeles in November 1993 and the photo was taken after that.

This aerial photo on Getty Images was taken on August 25, 1993 and it shows only the flower clock existed at that time, the train station did not.

The photo was taken by Steve Starr who confirmed the date is accurate.

He confirmed it to Jackson biographer and British journalist Mike Smallcombe too.

Allan Scanlan also confirmed that the train station was built in 1993.

The land use permit was approved by Santa Barbara authorities on September 2, 1993.

The grading permit was issued in October 1993

The building permit was approved in September 1993 too.

Despite overwhelming evidence that Safechuck lied various efforts have been made by Jackson’s detractors to somehow make his story work.

1. Dan Reed first acknowledged the station date but now insisted that Safechuck was abused even in 1994. ( He turned 16 years old in February 1994.)

After the Sun reported that Reed changed his story Reed said Safechuck was molested into his teen and that is in the film.

He also insisted that Safechuck was molested in multiple places as if that would somehow prove he didn’t lie about abuse in the train station.

In reality just like Safechuck made it clear in court and in the BBC interview that his alleged abuse ended when he was 14, in 1992, in an interview with Queerty on March 4, Dan Reed himself claimed:

“He liked prepubescent boys, and he did have sex with Wade and James up to about the age of 14. Beyond that, I haven’t heard of a victim older than 14.”

After Aaron Carter defended Jackson Dan Reed said in an interview on the Australian breakfast show 2DayFM Breakfast that at age 15 he was too old for Jackson as the age that Michael routinely lost interest in boys was around 14/15.

But after it was proven that any abuse in the iconic station was only possible after Safechuck was almost 16 suddenly the 16 year old Safechuck was not too old for Jackson.

and it’s true he could take them in 1994-1996. But that in no way proves he was on the ranch with Jackson when he took those photos let alone that he was molested at that time. In fact, Jackson as stated in a sworn declaration in November 1997 didn’t live in Neverland in 1994 -1996, but in New York and overseas and only occasionally visited the ranch.

Safechuck and Reed so far did not name any date in 1993-1996 when Safechuck and Jackson were on the ranch together and Judi Brisse, a maid working in Neverland between 1991-1997, tweeted that when the Safechucks were there Jackson never was.

2. Reed’s admission that Safechuck gave those photos to him proves that he knew exactly which building he was talking about. Despite that there have been efforts to explain Safechuck’s lie away pointing to other train stations on the ranch. The idea is that Safechuck confused one of those with the station shown in Leaving Neverland.
Beyond Safechuck’s photos and a drone footage over the main train station at the end of that scene making it clear they were talking about that station, there is the fact that the only station on the ranch with an upstairs room was the one built in December 1993.

Diane Dimond went so far as to argue that a 10-12 year old kid can’t tell the difference between a complex , two-storey building and a mere stops without any room.

3. On April 22, 2019, after Reed admitted that the station indeed did not exist before Jan 1994 he changed his tune again, tweeting an interview with Harrison Funk where Funk said that Jackson didn’t want him to photograph the train station because “he put it up without a permit initially”.

But Funk did not say the station was completed before 1993 and nowhere does he mention construction permit either. He said the photoshoot took place in June 1994 and Jackson could refer to an occupancy permit which is issued after a final inspection or revision permits which could still be needed since the actual building that was built was not the same approved by the original Sept 1993 permit, which becomes obvious when one compares it to the drawing on the land use permit plan.

In fact on the original plan the bay window looks different , hence a new permit was issued for the new version in 1994.

Whether in June 1994 Jackson indeed needed additional permits or was not well-informed about the process and believed he needed them is unclear but of course Reed could not explain why he would first build the station then get a permit for one that looks different than what was actually built.

4. In April 2019 the British tabloids, The Daily Mirror and The Sun ran stories claiming there was “bombshell evidence” that Safechuck was telling the truth. This supposed evidence were two books, “Remember the Time – Protecting Michael Jackson in His Final Days” by Javon Beard and Bill Whitfield and Jackson’s two bodyguards and “Untouchable – The Strange Life and Tragic Death of Michael Jackson” by Randall Sullivan.

The first book only gives a general description of how Neverland looked but does not specify when it looked that way. And the two authors never visited Neverland, they started working for Jackson in December 2006, after Jackson left the ranch. The book was ghostwritten by Tanner Colby who most probably wrote this passage. Colby never visited Neverland either.

Whitfiled confirmed that he doesn’t know how Neverland looked and what building existed in the early 90s and he accused the media of twisting his book to suite their agenda.

As for Sullivan, he assumed the station was there then but his description of Neverland was actually based on a Santa Barbara Sheriff’s Department video made during the 2003 raid. The book has many factual errors, this is just one of them in Chapter 6:

Those who desperately try to legitimize this scene know if people learned the truth how Safechuck was acting here and performed a calculated lie most would dismiss his allegations altogether.

If he was willing to lie about this why couldn’t he easily lie about any other abuse in any other location? The goal of the filmmakers was to make it as shocking and as detailed as possible. As it is often the case with false accusers, they failed to fact check each and every aspect of every detail and those aspects expose that the story was fabricated.